[from its draft, without fanciness in presentation]

This is a full range story, in as much as still pictures can show it, from
the beginnings to the end of a most popular ongoing historical event.

It moves from the setting the location to the completion of its facilities,
through three days and nights of open-air music,
to the throwing of the last rose to the performers. It
weaves together both things and people, audience and singers,
electricians and police. This carries a principle that setting the scene is
often as important as the performance itself, while remembering that a
whole lot of controversy was present then, adding depth to that wonderful
musical interest which remains central to an important annual celebration.
I didn't and couldn't have done this alone.

1974 was the year of the release of Willie's first big-hit album,
"Phases and Stages". Not far from College Station, Texas World Speedway,
where I'd been recording Indy style and NASCAR auto races, had sunk
financially into something like the mire that their parking lot seemed to
become every time they scheduled an event. To recoup losses, several local
entrepreneurs thought of corralling the rapid growth of Willie's casual summerfest
of musical friends, moving it for a few days, to inside the existing crowd control
at the track. I wanted to record this burgeoning properly, using my
larger format camera to go beyond the typically fuzzy/grainy images seen of
music in play, making it into another form of art through the whole event,
from the first word that reached me. In May, old friend Dave Ringland
showed up at my grad-student-shared house, saying that his crew was starting on
building the stage. What you have before you is part of the result,
as other friends joined in, and 43 years of additional effort followed.

With the full book in hand, you could settle back with some good country music
(best of all, that of these performers), and use that aural counterpoint
to even better see how it went, in far better detail and practical stereo.


Photographic Examples
[Please note: just a few of the images and their text are presented in this vintage 2000 web sketch, with image quality drastically less than in the 2017 printed book]

Sun on muscles, with sweep of track and Texas sky. Beauty of strength
of body and wood, beginning of the erection that led to so many others. An
incredible intensity of sunlight translated into silver by glass. 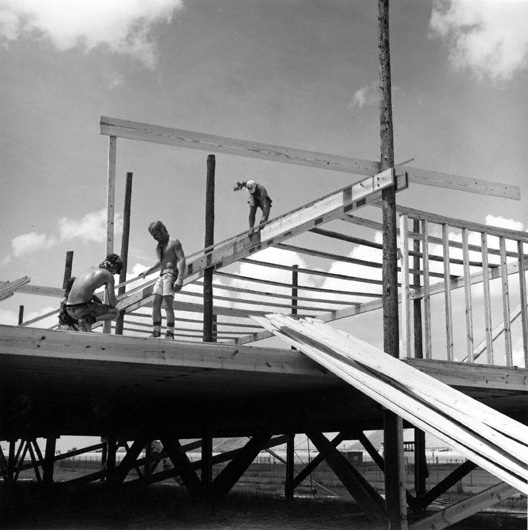 Threes and controlled angles were what I was taught make good photography.
Throughout this project, I was encouraged and directly aided by Tom
Heyde, a long-time photo pro who ran the town's leading studio, who espec-
ially liked this shot among my rushes. It represents both the realistic
sweat of the heat and the sense of a growing building. "Pick up the tempo"
says the song. 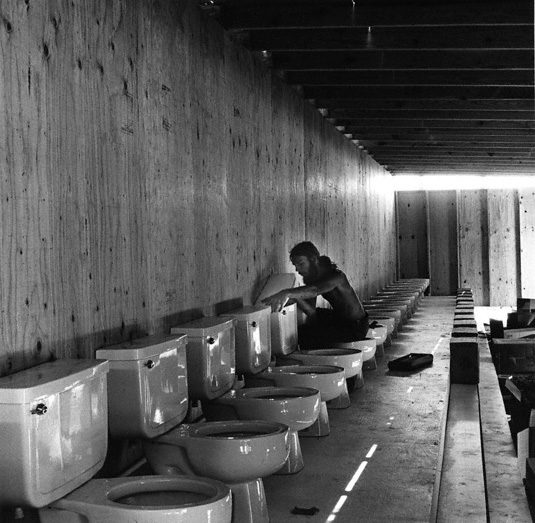 Preparations of the most essential sort. Somehow the expectation of
the needs of 100,000 anticipated people become most apparent here, the
visible result of need for planning. It's all coming in order. 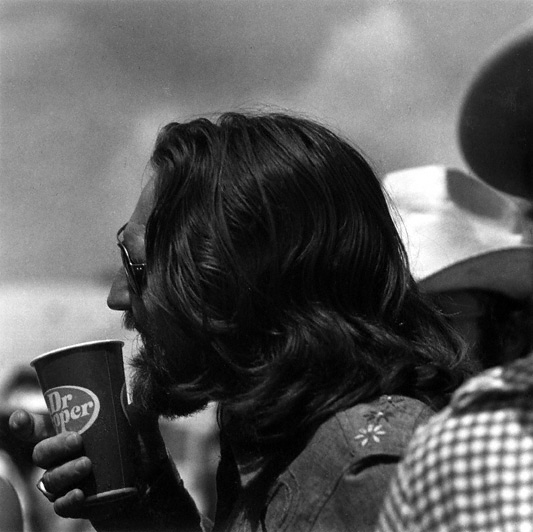 The man himself, continuing the enjoyment backstage. 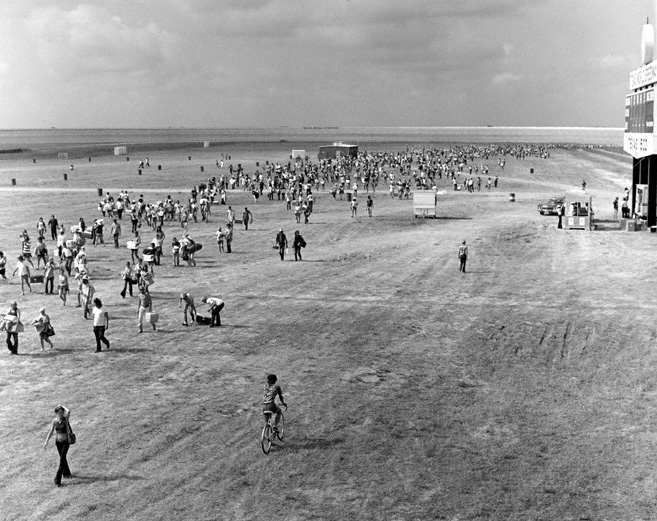 The opening of the gates. The sole bicycle has always made me
curious, providing a nice ebb for the general flow. 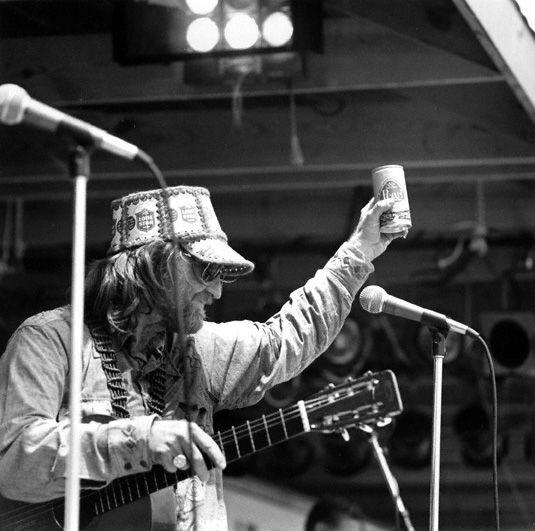 No one could accuse Willie of favoritism, despite his commercial
sponsorship, putting to use offerings of the state's competing brands
tossed to him by the crowd. 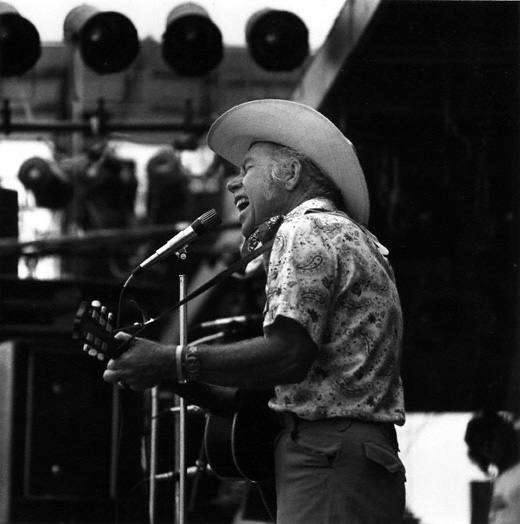 Willie brought old friends, like Floyd Tillman, the simple (in the
best of senses), courtly writer of, "Walkin' the floor over you" and other
standards, who was later so gracious to me when I visited his modest nearby
home. 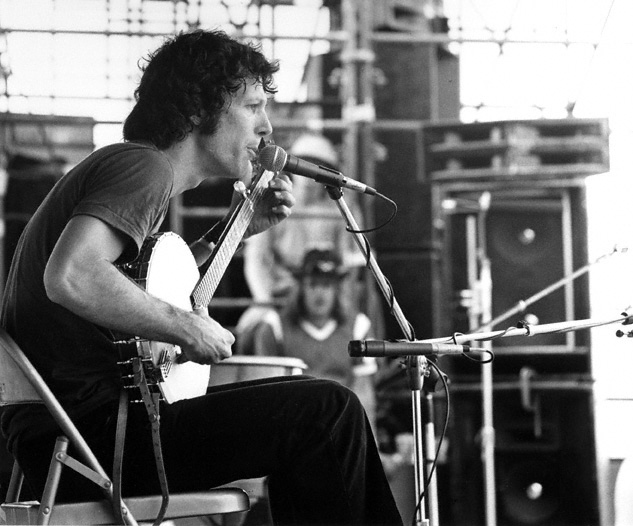 John Hartford. The last easy close-up I was allowed. Too many
stage passes had been issued for comfort. If I may have been among those
who trespassed on my deepest dictum that a photographer has no business
interfering in any way with the event he or she is recording, I apologize.
I sincerely remain hopeful that I was not. The best shooters are invisible at the
time. 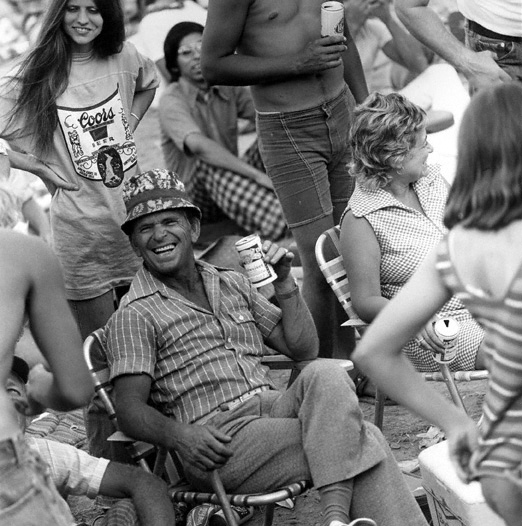 The local media's view was that only fringe elements crawled out from
under their rocks to attend. This is my response. More than anything else
(almost) that I enjoy seeing at an event is a true blend of appearance. Too
often, there's a clinging to little cliques, where all think we all need to
look just the same, even amidst this land of so much rhetoric of freedom.
Physically expressed differences, among other choices that harm no one,
would seem just exactly where that freedom comes home, shown so
appropriately here in this July fourth celebration. 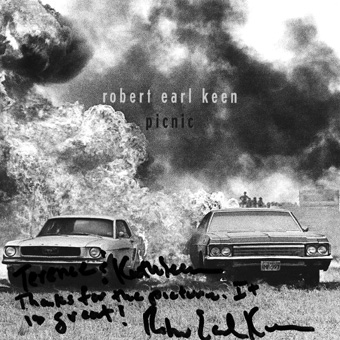 From another friend among a ßlittle group of journalism students at
A&M, Mike Sabin, comes this concurrent shot of trouble in the parking lot.
There were some amusing stories of Keystone tries to cut this short, but
the local departments did cut the blaze with enough despatch to keep it
from spreading far. This image captured something neither of us expected
at the time, a later-to-become-famous singer's own car, which was to be
immortalized in a recorded story as well as this hellish vision.
[Album cover copyright 1997 by Arista Austin;
its is reproduced here for reference purposes only] 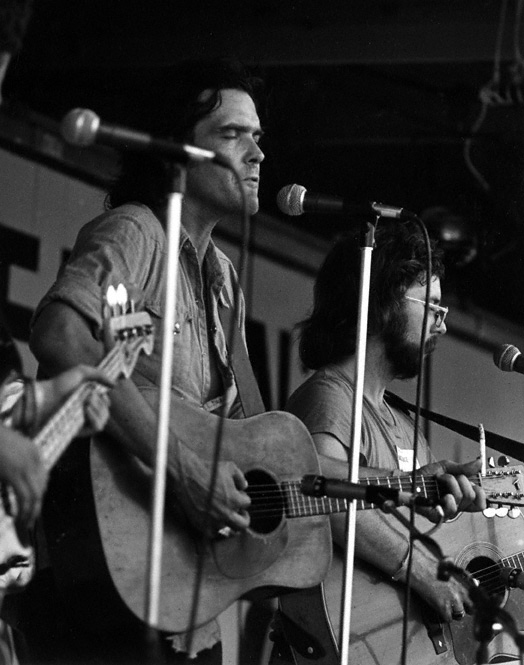 At that moment, I waited and waited for Guy Clark to open his eyes, but I really couldn't
blame a man then used to coffee houses and small bars for this approach to
the big stage. His music was marvelous, as always, nevertheless. 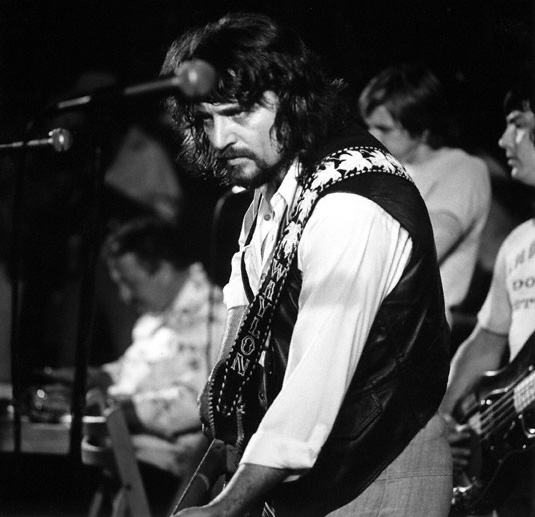 Waylon Jennings with Moon and band, looking every bit the storied outlaw.

Link to High Level Press for the finished book

Except as indicated in the text, all images, developing, and original
printing was my own. Daylight work was done with a Hasselblad camera
employing 80mm or 250mm Carl Zeiss lenses, using Kodak Plus-X film, a K-2
filter, and with the camera generally tripod mounted. Night work saw the
same camera and lenses, but 1-stop pushed Tri-X and no filtration. Metering
was zone system (in so far as practicable) using a vari-angle Gossen
Luna-Pro. All film development was with Agfa Rodinal at 1:100 dilution,
taking the developer to exhaustion. Printing used condenser projection, an
80mm Schneider enlarging lens, and Agfa Brovira single graded papers,
developed in 1:3 Dektol, followed by light selenium toning, as per Ansel
Adams' suggestions and personal research.